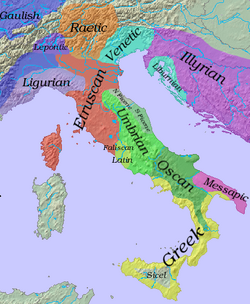 Oscan was a language spoken in pre-Roman Italy by the Samnites and neighboring peoples from an unknown time after the Indo-Europeans arrived in Italy (at least c. 1000 B.C.) until the final pockets were swallowed up by Latin in the first century A.D. It is a Sabellian language, the other major representative being Umbrian and is related to Latin by way of their mutual descendancy from proto-Italic.

The Oscans were expanding their holdings in Italy even up to the third century, when they captured a city in Sicily. But in the fourth and early third centuries, the Romans and Oscan-speaking Samnites waged wars that ended in the subjugation of Samnium into Roman control. The language began to decline after this period, and it especially took great losses after the Social War in 89 B.C. However, it was still spoken in Vesuvius when the city was destroyed in 79 A.D., but it likely disappeared altogether by the end of the century.

Oscan is preserved in approximately 650 texts, all of them inscriptions on stone or metal. Many inscriptions are only place names, and the most important resources are nearly 200 texts from Capua and Pompeii, both in Campania, a region south of Rome.

The inscriptions are written in a variety of styles, Latin, Greek, and Etruscan. The script that was used depended mostly on from which peoples the given Oscan tribe became literate. In Campania, the Oscans used a derivation of an Etruscan script, as these peoples had colonized the regions in the 5th century. An Eastern Greek script is used in Lucania and Bruttium, and a Latin Republican script is used in Central Italy.

Retrieved from "https://ancientlanguages.fandom.com/wiki/Oscan?oldid=2650"
Community content is available under CC-BY-SA unless otherwise noted.